The CPU (Central Processing Unit) is the component which commands are processed and calculations are performed.

The first computers (e.g.) ENIAC) the calculations were performed via electronic tubes. In order to meet the increasing requirements, more and more tubes were used in smaller sizes until they were replaced by less interference-pron and smaller transistors. With a modern PC and mandy of our notebooks, the processor is plugged into a socket and secured using a locking-mechanism. In tablets, smartphones and often in notebooks, the processor is soldered to the mainboard and can not be exchanged like the plugged processor.

In the picture below you see an Intel 1150 socket without processor: 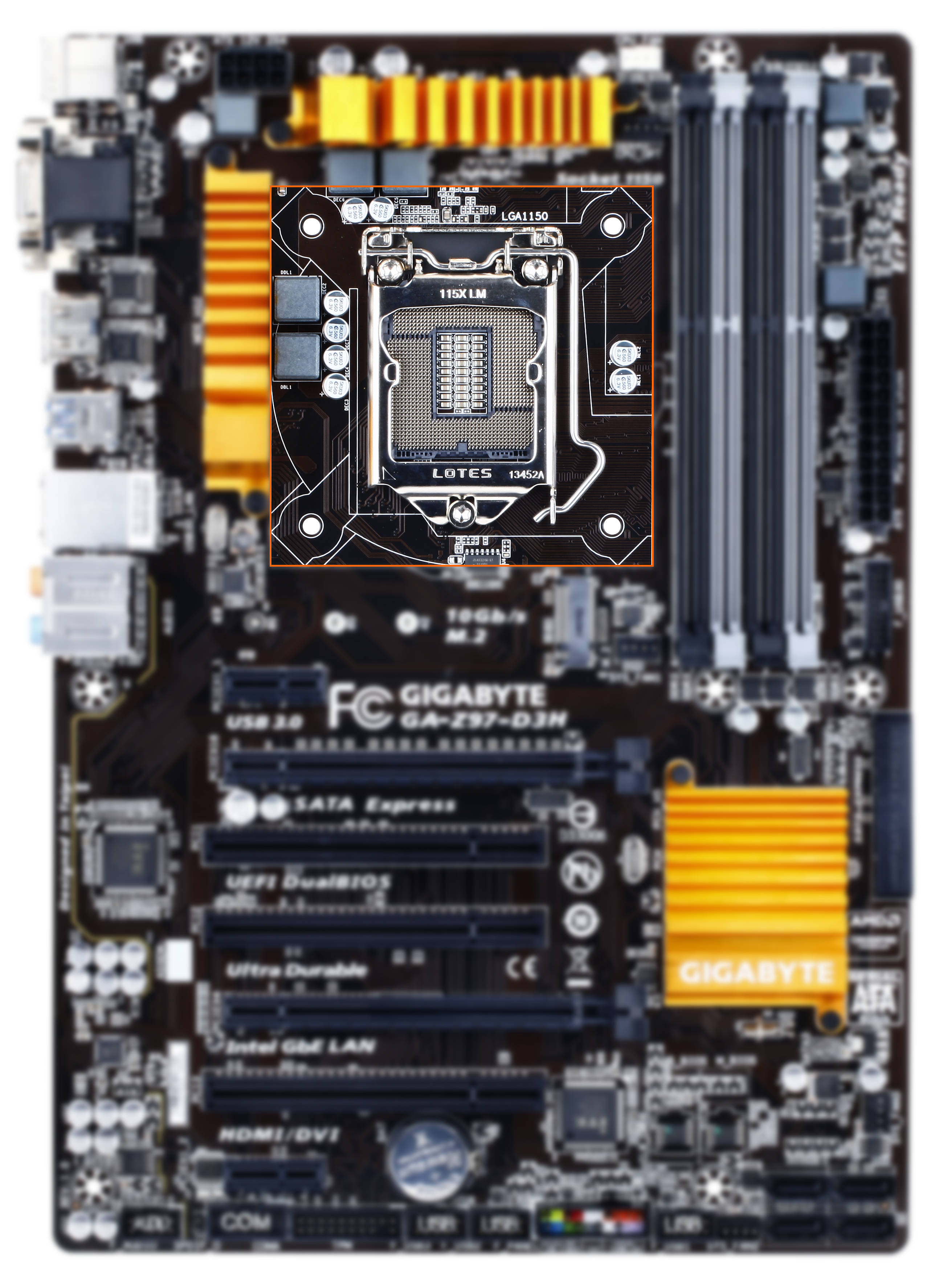 The socket indicates which processor can be installed. For example, an AMD processor can not be plugged into a socket which is designed for Intel processors.

Below you can see the differences between Intel and AMD.

There are clear differences in the arrangement of the pins, which prevent them from being used in another socket.

What does the extra numbers from an processor tell me?

If you look for the details of a processor in our configurator, you will get an overview of the technical data of the processor. As an example we got an Intel Core i7 processor:

lets start from the top to bottom:

In the first line of the Window you can see the manufacturer, the typ,  the number of cores and the  coreclock. You will find these information together with the technical data.

Socket: 1151 (Kaby Lake)
The socket is used to determine the mainboard to which of the processors can be plugged.

# of Cores: 4 (Quad-Core)
The more cores are in a processor, the more applications could work parallel. In order to use the full benefit of this multi-core technology, the corresponding application has to be optimized for this purpose.

# of Threads: 8
A partial sequence of a program is called as a "Thread". If the program provides that parts of it can be divided into different threads, they can be processed parallel. Intel is using "hyperthreading technology" to create additional virtual cores to handle more threads. For this, unneeded capatities and idle times are used to run two threads on one core.

Processor Base Frequency: 4,20 GHz
The coreclock is used to specify the basic clock of the processor in GHz.

Max Turbo Frequency: 4,50 GHz
The max tubro frequency can be switched on in certain situations to temporarily prove more power.

TDP: 91W
The TDP (Thermal Design Power) indicates the maximum thermal power loss of a processor. This value is crucial for choosing the correct cooling. The larger this value, the more powerful the installed CPU-Cooler has to be.

L3 Cache: 8MB
The cache is for saving files temporarily for the processor. It is located directly in the processor and therefore has very fast access times. The larger the cache, the less the processor has to access the memory. The speed is thereby significantly increased.

Processor Base Frequency in general:
The clock rate of the processor describes the operating speed.

Current processors work in GHz (gigahertz) range. For example, you can find the "4x 4.20 GHz" for the Intel i7-7700K. You can see that this processor has 4 cores and each works with 4.20 GHz

The clock rate is often used as a comparison criterion, but its not really suitable for this purpose. In addition to the clockrate, other factors such as the number of processing steps (length of the pipeline and clock cycles are required for processing). The size of the cache, the memory, etc. determine the effective speed. Within a model series, for example the Intel i5 Series of the 7th generation can be well used for comparison.

Difference betweend Intel and AMD:
At the moment, the most significant differences are in the performance, price and the overclockability of the respective CPU.

With intel processors, there are (except for the "K" series) fixed clock rates. Therefore overclocking is not possible. For AMD processors, overclocking is possible with almost every CPU. Overclocking can result in loss of warranty and should not be performed, or especially by experienced users.

Before you decide for a processor from Intel or AMD, you should be aware of the planned application areas.

Office
This area usually has the lowest hardware requirements. The following processors are recommended:

Multimedia
For the additional playback of multi-media content like BluRay movies, editing of photos the requirements on the hardware can rise slightly. Especially this relates to Movies in 4K quality.

Gaming
This area meets the highest hardware requirements. Depending on the game and the graphics quality, the following processors should be used in conjunction with a high-end graphics card.

Workstation
If you want to use your system as a workstation, it is advisable to contact the manufacturer of the software which is used or planned to use if it meets the appropriate requirements. In gerneal the following processores are recommended:

It should be noted that the respective software can have a considerable influence on the performance of the system. It may be that certain processors are not suitable for gaming, but perform much faster in other applications.